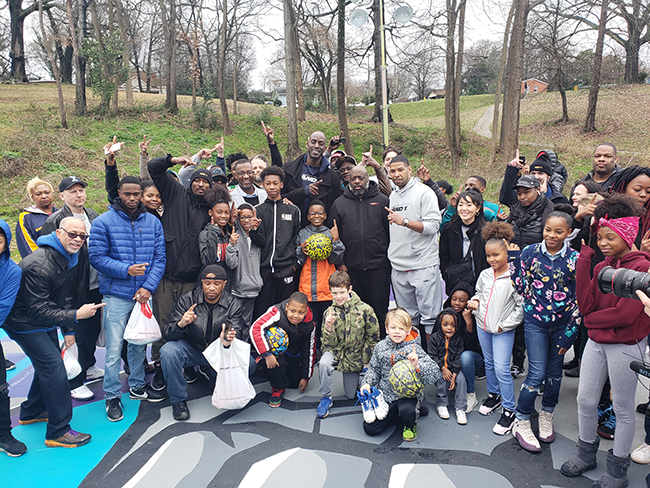 A popular park just got a little more colorful with some All-Star Weekend help from a South Carolina-born NBA star.

The basketball court in Cordelia Park along North Davidson Street is popping with a familiar Charlotte Hornets-themed purple and teal, thanks to a giant, on-the-court mural from graffiti artists the Illuminaries and sports apparel company And1.

“We are very excited about this wonderful addition to this great NODA park,” said Partners for Parks Treasurer, Al Brown. “This is the latest improvement to this park and these basketball courts that get used by so many area children and youth… Cordelia Park is really one of the hidden jewels in Mecklenburg County’s park facilities, so hopefully this publicity will bring it more to the forefront.“

Kevin Garnett, an NBA MVP in 2004, 15-time All-Star, and future Hall of Famer, led a community dedication during All-Star Weekend to mark the court’s transformation. Garnett is And1’s Creative Director and Global Ambassador, and grew up in Greenville, SC.

“Being able to reactivate a community or inspire kids to come outside to play,” is the best part about the makeover, Garnett told Respect magazine. “That’s sort of the energy and inspiration that goes behind giving something like this back to the community.” 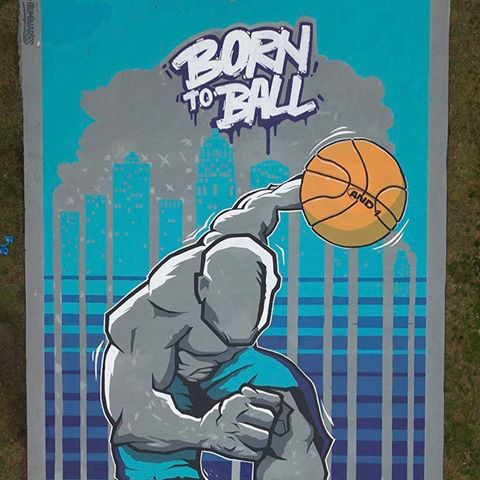 The massive work is the third court nationwide to get a makeover as part of And1’s “Paint the Park” initiative with the Illuminaries.  The two groups also teamed up to paint courts in Compton and Oakland, California.

The Illuminaries are a popular 2-person team of mural artists based in the Bay Area, and their Instagram page even boasts a picture with Charlotte favorite son and NBA star Steph Curry. Their website quotes the pair as saying, “Our passion is improving indoor and outdoor spaces with creative use of paint.”

Illuminaries partners Tim Hon and Steve Ha got the mural started in the early morning hours of February 8 with the first coats of purple paint.

“It’s really to inspire the youth,” Hon told WCNC’s Rob Hughes, before the sun came up. “That’s why we combine the art with basketball. It’s to get the kids outside, to get them outdoors, and get them into the game and just inspire them and energize them.”

Garnett dedicated the court a week later during All-Star weekend, with Mecklenburg County commissioners on hand to witness the new landmark. The county’s official twitter page posted a picture with Garnett, saying, “We appreciate @And1basketball and The Illuminaries for taking this neighborhood court to the next level!” 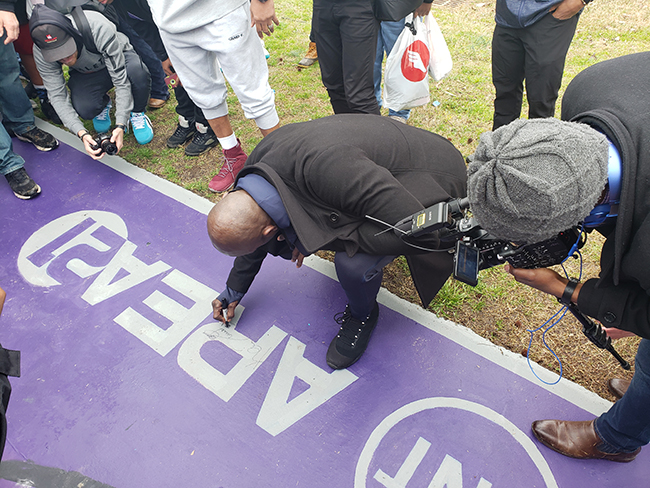 “Nothing sparks more pride than the home court where you learned to ball,” tweeted And1 Basketball. “Charlotte, let’s keep your game proper.”

“It’s just fun to see the end result of all those kids,” chimed in Hon.

“When Partners for Parks uses the Cordelia Indoor Pavilion again this year for our Annual Awards and Sponsor Celebration event, our partners and award winners will also get to enjoy these artists’ work,” added Brown.

You can find the court in Cordelia Park, 2100 North Davidson Street in Villa Heights/Optimist Park, just south of NoDa. The 24-acre park will once again be part of one of Open Street 704’s most popular routes in the spring of 2019. Check it out on April 28th!